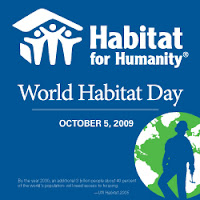 “Shelter plays a critical role not only in the health of individual families but in the well-being of communities and ultimately our larger global connection.”
– Jonathan Reckford, CEO Habitat for Humanity International
(Watch the CEO’s address World Habitat Day here)

World Habitat Day was held on Monday, October 4. World Habitat Day’s purpose is to call attention to the current global state of the human habitat and push toward adequate housing for all.

By raising awareness and advocating for universal decent housing, the hope is to dismantle and alter the systems that reinforce and entrench poverty housing. In doing so, we can make an affordable, decent place to live a reality for all.

World Habitat Day is a day for grassroots action and a day for people to be united in their efforts to eradicate poverty housing.

In addition, Habitat for Humanity International released their 2011 Shelter Report – Housing and Health: Partners against Poverty in conjunction with World Habitat Day on October 4. The report urges the U.S. government to recognize the link between health and housing around the globe as well as recognizing that addressing the issue of adequate housing and healthy communities together is key in any successful health-focused strategy.