Tweet on Twitter Share on Facebook Email this article
This morning the omnibus spending bill text for FY 2016 was released after weeks of negotiations. Many programs saw slight increases in funding compared to last year, but overall funding is essentially flat, especially when considered relative to rising housing costs. Of note, the HOME program, which the Senate proposed cutting from $900 million to $66 million, was restored and increased to $950 million. The chart below shows HUD and USDA funding for selected programs for FY 2015, proposed FY 2016 and actual FY 2016. Red numbers indicate decreases compared to FY 2015 enacted levels, greennumbers indicate increases, blue numbers indicate increases from FY 2015 but lower than historical levels and black numbers indicate flat funding. 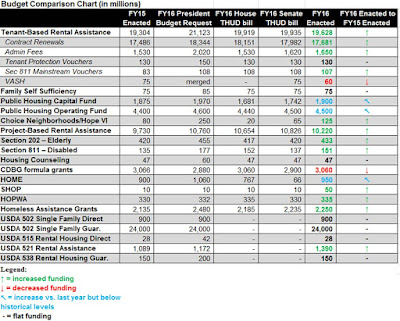 Also included in the bill are provisions that:
Property-based Section 8 contract renewal funding appears slightly lower than the president’s proposed budget, but the lower number may reflect revisions by HUD to the amount needed or greater carryover from last year and do not appear to be a short-funding of contracts.
Early this morning the House also released the tax extenders bill. It appears that the tax extenders bill will be voted on separately by the House and the omnibus and tax extenders bill will be combined when sent to the Senate. Housing highlights from the bill include:

The House is expected to vote on both bills on Friday, Dec. 18, before holiday recess. The House will need to pass a stopgap funding measure on Wednesday to prevent a government shutdown. The short-term continuing resolution will most likely run through Dec. 22 to give the Senate enough time to pass both the tax and spending bills.