What will happen with house prices?

This week’s Member Note is the first in a series of guest commentary by Bill McBride, whose Calculated Risk Blog is one of the most prolific and educational sources of housing data and analysis online. Once a month, we will publish one of Calculated Risk’s blogs or co-write one with him. We hope that you find this new addition as useful as we do.

It is clear that over the next year house price growth will slow from the torrid 20% year-over-year (YoY) pace in February (and likely also in the March report that will be released later this month). I think there are three likely scenarios going forward for house prices that I’ll call “slow”, “stall” and “bust”.

First, last year I asked What could cause inventories to increase? and I noted Richard Feynman’s comment about science (1 Minute video here):

“First, we guess … Then we compute the consequences of the guess … to see what it would imply and then we compare the computation results to nature or we say compare to experiment or experience, compare it directly with observations to see if it works.

I take the same approach to making housing predictions. First, I make some guesses as to what will happen (I tell myself some stories), and then I see if it fits the data. If the data doesn’t fit the story, the guess is wrong.

So, these are just guesses – and the data will tell us which (if any) are correct.

The “bust” scenario would be nothing like the decline in house prices following the housing bubble. Following the bust, house prices declined about 26% nationally from the peak (according to Case-Shiller), and significantly more in some cities. For example, prices declined 60% in Las Vegas, and over 50% in Phoenix and Miami following the bubble. In the housing bust, prices fell for several years due to the large number of distressed sales (foreclosures and short sales). We will not see cascading price declines this time since lending standards have been solid.

The following graph shows the year-over-year change in the Case-Shiller National Index (Seasonally Adjusted) since 1976. We can see the recent sharp increase in prices. 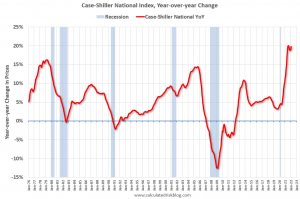 During the housing bust, real prices declined 35% compared to a 26% decline in nominal prices (this was a low inflation period). 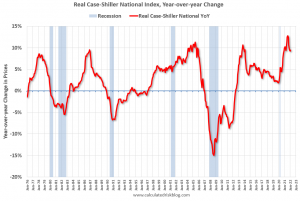 House prices tend to be sticky downwards in nominal terms. Homeowners resist selling for less than the recent sale prices of similar homes in their neighborhood. However, there are always the homeowners that need to sell (death, divorce, moving for employment, etc.), and sometimes these homes will sell for less than previous sales. Note that house prices were not sticky downwards during the housing bust due to the all the forced sales.

However, even in normal times, house prices are not sticky downwards in real terms as the second graph above shows.

The data seems to argue for the slow house price growth scenario, but my view is the most likely scenario is house prices will stall in nominal terms and decline in real terms. I’ve been looking at the 1978 to 1982 period for lessons, and that would suggest a stall in house prices (hopefully we avoid a recession).

My view on house price growth vs. month-of-supply is based on the graph below that shows existing home months-of-supply (inverted, from the NAR) vs. the seasonally adjusted month-to-month price change in the Case-Shiller National Index (both since January 1999 through February 2022).

In February, the months-of-supply was at 1.7 months, and the Case-Shiller National Index (SA) increased 1.90% month-over-month.  The black arrow points to the February 2022 dot. 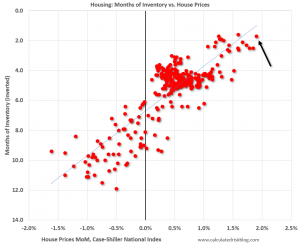 The following graph shows months-of-supply since 1999 (not seasonally adjusted). As of March, months-of-supply was at just 2.0 months according to the NAR. Although inventory is now increasing year-over-year, and sales are declining, we are still a long way from even 4 months-of-supply (slow house price growth scenario).

To get close to 6 months-of-supply (likely needed for stall scenario), we’d probably have to see both an increase in active inventory and a decrease in sales. 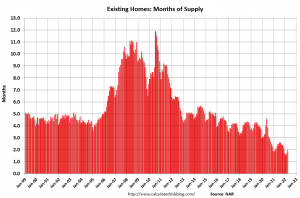 If sales decline to 5.0 million SAAR, inventory would have to increase to around 2.5 million units to reach 6 months-of-supply. This also might seem unlikely and would seem to argue for the slow house price growth scenario; however, I think there are reasons we might sales decline to around 5 million SAAR. We could see a wealth effect from the recent decline in the stock market and speculative assets. Also, my suspicion is household formation will slow (I think there was a sharp increase in household formation in 2021 that will slow later this year). See The Household Mystery.

For new homes, the stall scenario would suggest inventory increasing to well over 8 months (currently new home inventory is at 6.4 months). This seems possible.