Understanding the cause and addressing the decrease in African-American homeownership

A recent article in The Washington Post on “The ‘heartbreaking’ decrease in black homeownership” details many of the complicated issues that have contributed to African-American homeownership declining to a level lower than when the Fair Housing Act was passed in 1968. Yet, dangerous myths continue to undercut efforts to understand why this homeownership gap persists. It’s a subject that is the focus of a new working group of NHC members, which will develop concrete, practical strategies to reverse this trend, which continues to get worse. We hope you will join us in this important work.

Discrimination is most often cited as the reason for the decline, and while it is clearly embedded into the foundation of the problem, we also must be cognizant of the fact that historic changes in law and regulation have failed to have a meaningful and lasting impact on the homeownership rate. We also need to do a much better job of understanding the current drivers of the homeownership gap and the most impactful strategies to close it. To do this, we are also going to have to let go of some popular myths about what happened during the housing disaster of 2004-2014.

The fact is that the largest increase in African-American homeownership occurred between 1994 and 2001, when lenders across the country, encouraged by government sponsored investors Fannie Mae and Freddie Mac, sought out African-American first-time home buyers in record numbers. These were overwhelming responsible, well-documented, long-term fixed rate loans that performed well. As housing values rose, the equity wealth these loans created became a tempting target for cash-out refinancing. African-Americans were increasingly targeted for equity-stripping loans that appeared to cost little but were actually both expensive and risky. The chart below makes clear how the African-American homeownership gains that predated the crisis were wiped out in just a few years. We haven’t even begun to fully understand the impact this will have on an entire generation of mortgage-ready African-American renters deciding whether or not to become homeowners. 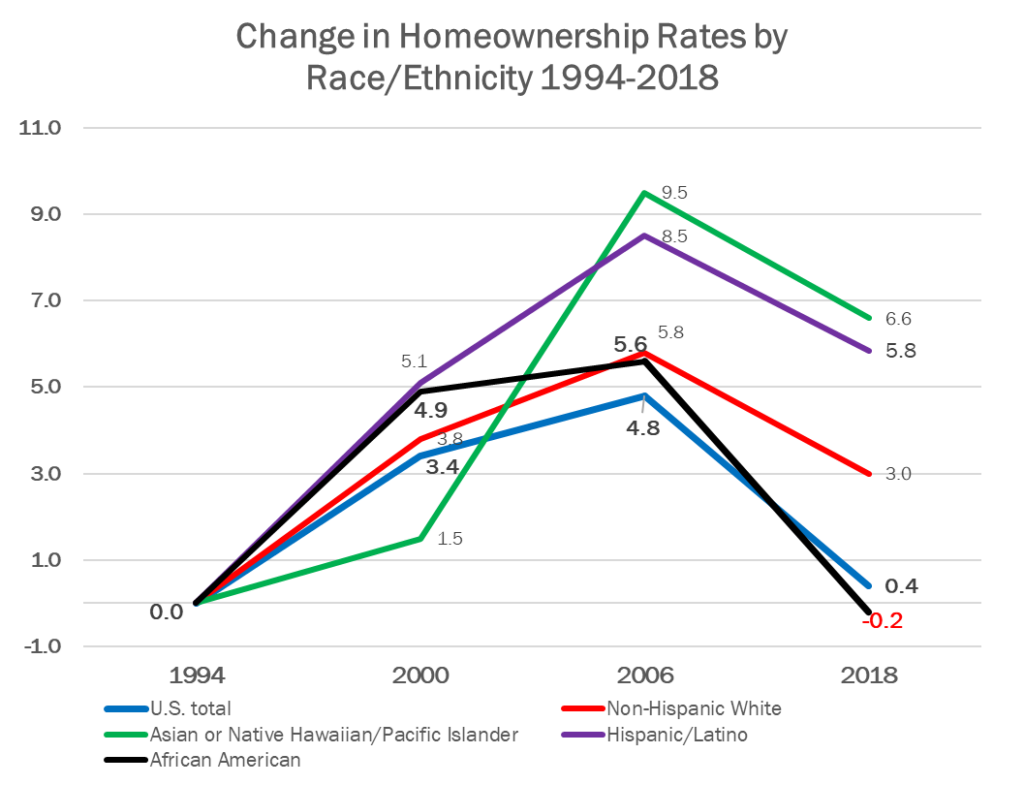 When the market crashed, everyone was hurt. White homeownership fell nearly three points, as did Hispanic and Asian homeownership. But African-American homeownership plunged nearly twice as much – a total of 5.8 points – despite having the smallest increase in homeownership during the previous five years. Why? We don’t know yet.

One factor is likely to be the role of cash-out refinancing which reduced equity in the original prime loan and was then replaced with an unsustainable subprime loan. This was not the case in Texas, however, where cash-out refinancing was strictly limited by law. A study conducted by the Federal Reserve Bank of Dallas found that “at the peak of the housing crisis, the share of subprime mortgages underwater in Texas was 40 percentage points below the rest of the nation, with serious delinquencies among subprime borrowers about ten percentage points lower.”

It is likely that many – maybe most – African-Americans who lost their homes were first refinanced into toxic mortgage products they could not maintain. The worsening recession leveraged these trends, and concentrations of foreclosures in poor, historically African-American neighborhoods drove up vacancy and blight, which further fed the cycle. Once we understand the cause, we can address an even harder issue – how we prevent it in the future and how we convince hundreds of thousands of African-Americans whose American Dream was turned into a nightmare to trust the system again.

To answer these and other important questions, please contact Tristan Bréaux to sign up for the African-American Homeownership Working Group. I also hope you’ll join me at Solutions for Housing Communications for a panel discussion with Antoine Thompson of the National Association of Real Estate Brokers, Kyle Williams of the National Urban League and Lisa Rice with the National Fair Housing Alliance on communications strategies for addressing this serious issue.