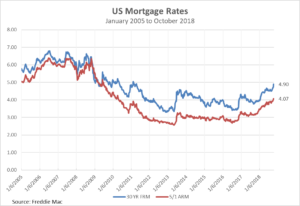 The most recent Freddie Mac mortgage survey had some sobering news for the mortgage market. The 30-year fixed-rate mortgage jumped 19 basis points to 4.90 percent, leaving rates at the highest level since April 2011. There are two serious risks with rising mortgage rates. Most immediately, higher rates increase the cost of borrowing money, both for home buyers as well as home builders. The second is that some lenders are more likely to market cash-out refinances that weaken the equity levels of existing home loans, increasing risk of default in a recession.

At a time when there is a tremendous shortage of affordable housing stock for both home buyers and renters, rising rates have a direct impact on housing affordability. An increase of an additional 100 basis points or 1 percent would raise the cost of a $200,000 mortgage by approximately $125 per month. Increased rates impact apartment rents in two ways. Construction loans are more expensive, and fewer home buyers mean more renters, resulting in more demand for existing units – and higher rents as a result.

But one of the most troubling impacts of rising rates occurs when lenders seek to replace the shrinking supply of mortgages for the purchase of a home and refinance loans with cash-out refinances. During the run up to the mortgage crisis and subsequent Great Recession, a historic amount of home equity was extracted from single family homes through cash-out refinancing. This had a direct impact on the scale and pace of mortgage defaults, making the crisis much worse than it might have been. Not so in Texas, where cash-out refinancing was strictly limited by law. A study conducted by the Federal Reserve Bank of Dallas found that “at the peak of the housing crisis, the share of subprime mortgages underwater in Texas was 40 percentage points below the rest of the nation, with serious delinquencies among subprime borrowers about ten percentage points lower.”

Restrictions on cash-out refinancing need not be a barrier to accessing the equity in one’s home for retirement, education or even health care emergencies. Similar equity restrictions are already a common feature of retirement accounts. Cash-out refinancing to cover home improvements should also be exempt from any additional restrictions, since the money is reinvested in the value of the home. Even cash-out refinancing for just cash can be allowed as long as the total equity isn’t reduced past a responsible level. Where those levels should be set is a reasonable area for discussion and debate. One thing is certain however, we need to avoid making the mistakes of the past if we are to avoid them in the future.