Earlier this morning, the U.S. Department of the Treasury released its report on modernization of the Community Reinvestment Act (CRA), which is expected to be immediately followed by formal initiation of regulatory action by the Office of the Comptroller of the Currency (OCC) and the other CRA regulators. As we expected, the “report” was not published in the same format as past responses to President Trump’s February 3, 2017 Executive Order on Core Principles for Regulating the United States Financial System, but is instead in the form of a public memo to the regulators that make up the Federal Financial Institutions Examination Council (FFIEC) – the OCC, the Federal Reserve Board of Governors and the Federal Deposit Insurance Corporation (FDIC). NHC will host a members-only webinar to review the report in detail this week. NHC members will receive webinar registration information by the end of the day. Please check your membership status here to confirm that your membership is up to date.

CRA modernization is critically important because the structure of banking has changed so dramatically since 1977, when the CRA was enacted. While we have made a lot of tangible progress in the past fifty years, we have also had some devastating setbacks. The most significant failure is the fact that the African-American homeownership rate is actually lower than it was in April of 1968, when the Fair Housing Act was enacted in the days following the assassination of Rev. Dr. Martin Luther King, Jr. This is a national tragedy that must not stand. Homeownership is the most important driver of wealth creation in the American economy and a century of housing discrimination embedded in the U.S. government’s housing finance system prior to 1968 must be addressed. Nothing illustrates this better than this map, one of thousands created by the Home Owners Loan Corporation (HOLC) and adopted by the Federal Housing Administration (FHA) to ensure that African-Americans were explicitly denied the American Dream. Note that the African-American neighborhoods are labeled as “hazardous,” and areas showing signs of integration are labeled “declining.” 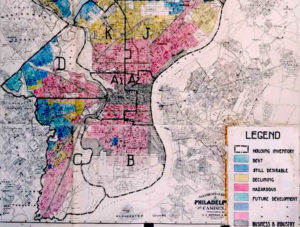 Similar maps were created for Detroit, Chicago,New Orleans and hundreds of other locations. Maps like these haven’t been used in fifty years but the patterns they established have been incredibly hard to reverse, despite the efforts of government, lenders committed to affordable housing and a wide range of housing advocacy organizations including many of NHC’s longest-standing members. If done right, CRA modernization can serve as an opportunity to refresh this important strategic tool. But this will only happen with concerted effort, advocacy and money.

NHC has been defending our American Home since 1931, and we will continue to lead with practical and effective solutions that leverage best practices and lessons already learned. One way you can sharpen your advocacy skills is by attending the Solutions for Housing Communications convening on April 17 at the National Press Club.