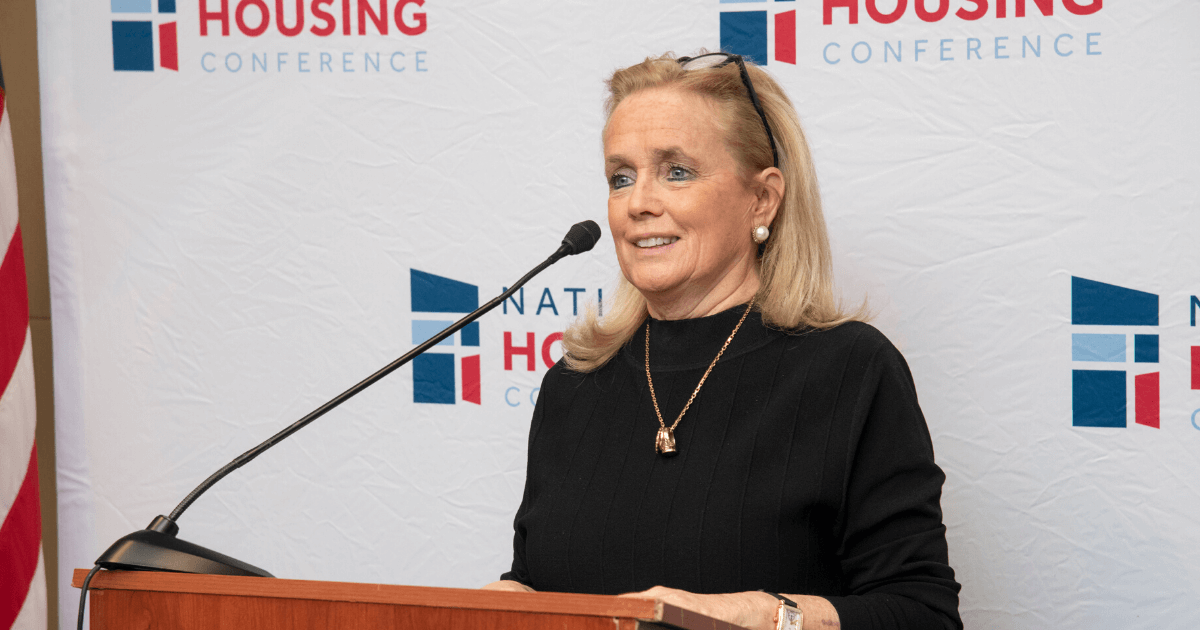 A recognized national advocate for women and children, the Honorable Debbie Dingell has represented the 12th district of Michigan since 2015. Representative Dingell serves as the Co-Chair of the Democratic Policy and Communications Committee and sits on the Committees on Energy and Commerce and Natural Resources. I have had the honor of working with her on President Obama’s Detroit Revitalization Team, and on other community development issues in Southeastern Michigan. Whether in the Roosevelt Room of the White House or the community room of a public housing development, she is one of the most strategic, effective and impactful people I know. We were proud to have her attend our Solutions for Affordable Housing’s Advocacy Day Breakfast on Capitol Hill. -David

When I took over the GM Foundation, we were very traditional and basically supported every executive’s favorite charity. I wanted to reshape our giving, and I knew we had a housing problem back then. I was trying to understand the neighborhoods in Detroit, and David was my teacher. Housing is so important. He’s taught me a lot and we’ve stayed together since then, fighting the good fight.

I’m very glad to be here with you today. The issues you are talking about are so important, although it’s easy for them to get lost. We are still doing things on the Hill. You’d think the only thing we are talking about is impeachment, but we are actually doing a lot. One of the groups I’m working with a lot right now are veterans who are finding themselves homeless because they can’t find jobs. Homelessness is increasing, as we all know. The men and women David described in his remarks, are often working two jobs but are still at the poverty line. They’ve got kids, and I’m so tired of people taking shots at them when they are working their tails off. They’re often working harder than a lot of people I know. But they can’t afford their housing and have to make choices between putting food on the table or paying for day care to keep their jobs.

Thank you for all that you do, and I pray that your day on the Hill is successful. You know, I worked with David on the Detroit bankruptcy when he was talking about the Roosevelt Room in the White House and community groups. I’d much rather be meeting with a community group than in the Roosevelt Room. I am so proud of what is happening in Detroit. It is coming back, but those neighborhoods aren’t. Those vacant homes are still sitting there. When people are talking about what we should do, it is important that we support jobs, that we support business and do all of that, but hard-working men and women want a place they can afford that is in a safe neighborhood, where they can take care of their kids and give them an education in quality public schools. We have not been talking about that enough. It matters to me.

Low- and moderate-income homeowners did not cause the Great Recession. It happened in 2008 when I was still at GM. I said to President Obama at the time; people appreciate that we saved the auto industry, but that fear, of working in jobs with no pay raises, of making their mortgages, of ending up on the street – that is still happening now, ten years after the Great Recession. They didn’t make a house of cards that was going to fail, they didn’t buy credit default swaps, and they didn’t make the risky trades on Wall Street. All they did was just what I talked about. They wanted to pursue the American Dream. They want to work hard, buy a house and start a family.

The economy is doing better, but it is not doing better for too many people. There are far too many people in our communities, who are struggling with the impossible decision of paying rent or paying for prescriptions drugs. The stress from rising housing cost are placing undue burden on our nation’s seniors, our veterans, and the working poor. Housing provides stability for our nations families and allows them to become stakeholders in the community. While the federal government does play a key role in ensuring that access to affordable housing, we need to remind people of that and that’s what makes your advocacy here so important. You are going to talk about what our moral obligation is in this country.

The U.S. Department of Housing and Urban Development helps assist in this endeavor by providing housing assistance for low-income and elderly individuals, Section 8 rental assistance for low-income individuals, public housing aid and Section 811 housing for individuals with disabilities. HUD provides critical assistance to individuals and families in need with two-thirds of the aid recipients making less than 30% of the area median income. Yet we can’t get the money needed to build better housing or even more housing.

I have this senior building that’s right across the street from my office in Michigan, in a community where I specifically placed my constituent office. They have so many issues that need to be addressed, with the elevators not working, filled with infestation and bedbugs. I asked HUD officials to come and see what these residents were going through and living in. It is just not right, and we have to do something about this problem. So, this is what we going to do, what you’re doing and what your leadership is doing, which is innovative thinking and think out-of-the-box to create housing affordability in our country. We are not nearly doing enough, and this is what you need to tell every Member of Congress. We need more robust funding at HUD, so that all Americans have access to housing.

I just think that’s a basic need, along with access to quality affordable healthcare. We need to be able to take care of those who need housing. They should not be living on the street, especially our mothers with their children. This is a vicious cycle, like all issues facing our Nation, we are not going to solve them overnight. This is not about Democratic solutions or Republican answers, we have to do it together. We have to work on this in a bipartisan manner. There’s an only saying, “if you want to go fast, go alone; if want to go far, go together.” By working together and building coalitions, we will craft better policy that delivers for the people of this country.

Too often around this city, and this entire country, compromise is considered a dirty word. My husband, who was very wise and great man, for the last few years of his career, he kept saying that compromise isn’t a dirty word. He said, policy debates aren’t about winners or losers, it’s about making the difference in somebody’s lives. Voters can and should listen to the issues, but you can endorse good policy without having to say that it’s Democratic idea or a Republican idea. We need to remind people what it means to be an American. We need to remind them what it means to be a part of a community, and what that community’s obligations are to each other. That’s the strength of our democracy, that’s that backbone of democracy, and that’s what our forefathers had in mind.

Thank you so much for asking me to address you this morning. I hope that you have a great day on the Hill but make your voices loud and clear. It is great that you’re here, but when you are finished with today, go home and organize and advocate. You can make a difference, if they know that there’s a coalition of people at home saying that there’s a problem, and you have to be a part of the solution. Thank you for including me this morning.