This week, the Bureau of Labor Statistics announced inflation numbers for September 2022, and they were not encouraging. The Consumer Price Index (CPI) fell 0.10 points to an annualized rate of 8.2 percent, largely as a result of lower fuel prices. However, the much more important core inflation number, which does not include volatile energy and food markets, rose 0.16 points. With gas prices rising again, the near-term outlook isn’t encouraging for controlling inflation without more significant action by the Federal Reserve—and more housing supply to address rising rents.

This rise means we are likely to see higher interest rates on home mortgages, higher rents, and less available credit for home construction. At the beginning of the year, rates on a 30-year fixed-rate mortgage of 7 percent seemed pessimistic. Today, we are already seeing rates at that level, and they will likely go even higher before year-end.

High rents were the biggest driver of inflation this month. But there is a silver lining. The October 2022 Apartment List National Rent Report said the national index for rents fell by 0.2 percent over September, the first time this year that the national median rent declined month-over-month. Part of this drop is seasonal, part is due to pandemic disruptions in household formation beginning to settle down, and part is due to the impact of higher rents on mobility. 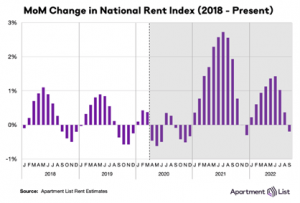 The official measures of inflation in the CPI—Owners’ Equivalent Rent and Rent of Primary Residence—account for almost one-third of median CPI. And these measures increased at about a 10 percent annualized rate in September. But the official measures lag the private measures (there are significant differences), and the slowing increase in rents will likely show up in CPI in the coming months.

Vacancy rates fell to 4.1 percent in 2021 and have steadily increased to 5.3 percent in September, still well below normal, according to the Apartment List Vacancy Index. Rent increases set records last year and spiked this year as well, though not as much as in 2021. We won’t know what the longer-term trend is until next spring, but it looks positive for renters.

Realtor.com’s August Rental Report acknowledged the U.S. rental market in August 2022 saw its first single-digit growth over the past 13 months. But while the median rent growth across the top 50 metros slowed to 9.8 percent year-over-year for 0-2 bedroom properties, it is still three times as fast as the growth rate seen before the pandemic. 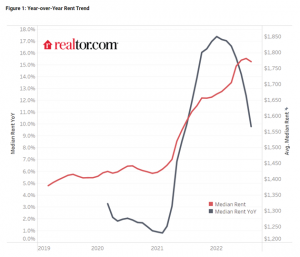 This week’s CPI numbers are troubling and will contribute to higher housing costs as the Federal Reserve Board continues to increase interest rates. This increase results in higher mortgage costs and less homebuilding, adding to the housing supply shortage. Housing affordability is the worst it’s been in decades, and the lack of supply is a major reason why. 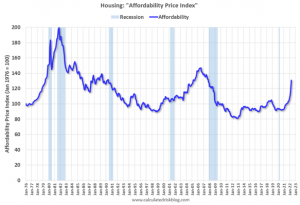 NHC is working with the Biden Administration and bipartisan leaders in Congress to increase affordable housing production. Legislation, like the Affordable Housing Credit Improvement Act and the Neighborhood Homes Investment Act, has bipartisan support and would create 2.5 million homes over the next 10 years.

There is no magic wand to solve the housing affordability crisis. Increasing housing supply requires investment and time. But without more housing production, unaffordable housing is likely to be with us for the foreseeable future.

Bill McBride is the author and creator of the Calculated Risk Blog and is a periodic contributor to the NHC Member Brief.