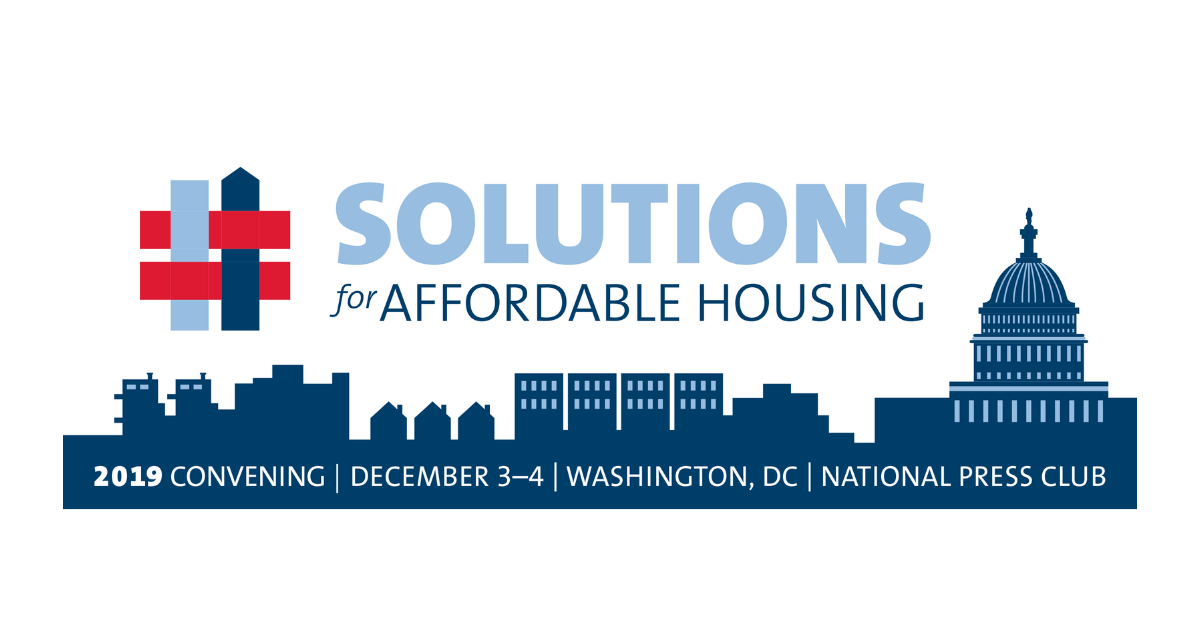 Remarks of David M. Dworkin, president and CEO of the National Housing Conference as delivered at Solutions for Affordable Housing in Washington, D.C. on Dec. 3, 2019.

It has been over 50 years since our country came together to draft a comprehensive national housing legislation; the Housing and Community Development Act of 1968. It was proceeded by the National Housing Acts of 1949 and 1937. The National Housing Conference was a leader in all of these initiatives. I proudly display the pen Lyndon Johnson used to sign the 1968 Act on my office wall. We are long overdue for another one.

This is why we are calling on all of our members write a national housing act for the 21st century. It’s an audacious goal – to write bipartisan legislation that is ready for introduction in January of 2021. But we can’t do it alone. We need all of you to join us. You can help through your capital contributions, but just as important is your contribution of intellectual capital.

Some of you here today are having your first experience with the National Housing Conference. We have been the unlikely coalition of housing leaders since 1931. Our founders realized that sustainable and impactful change happens in the center, and we create that space – the place where housers come to get things done.

That’s why we need you to join us today. You can do it online or ask Amanda or I to set up a meeting to discuss how your organization can get involved. We have doubled our membership in the past two years, but we need you – your voice, your experience, your solutions.

I hope that when we see again at the National Press Club for Solutions for Housing Communications on March 18, you will be one of our new members, like MGIC and Guild Mortgage and Zest Finance are today. They and a dozen other organizations have joined in just the past six weeks. Working together we can make a difference – a big difference. It has been done before. Led by women and men who faced greater obstacles than we do today, though it doesn’t always feel that way to us.

I’ve noticed an interesting new phrase online recently, a new call to action from an old slogan: “Woman Up.” NHC has a distinguished history of putting this slogan into action.

In July of 1934 one of the most impactful people in the modern White House, First Lady Eleanor Roosevelt, joined us at our first Policy Conference at the Willard Hotel, just down the street from where we meet today. And the following day, a delegation from NHC led by our founder, Mary Kingsbury Simkhovitch, met with her and the President to discuss housing priorities.

At that inaugural policy conference, Mrs. Roosevelt called upon us to build public-private partnerships to clear away what then were widely referred to as slums – dangerous housing units, many of which had no running water or electricity, and to build quality, affordable housing in its place. Government could not do everything, she said, and the private sector must help solve the housing crisis.

The year before NHC and Mrs. Roosevelt had succeeded in including nearly two billion inflation-adjusted dollars for housing construction as part of the first modern infrastructure bill, the National Industrial Recovery Act. But they were not satisfied and not done, not by a longshot.

They set out to convince President Roosevelt that more was needed and on October 28, 1935, he wrote to New York Senator Robert Wagner: “After… I get back from Warm Springs, I should much like to have a talk with you in regard to the more permanent aspects of slum clearance and low cost housing.” At the bottom of the letter is a note to the First Lady noting that this refers to the request of our founder, Mary Simkhovitch. In the next three years, they would work together to lay the foundation of the modern housing finance system and building thousands of public housing units.

Six years after the passage of the ‘37 Housing Act, and just days after returning from the Casablanca Summit and under crushing pressure from Stalin and Churchill to invade Europe, President Roosevelt wrote an unsolicited letter to Mrs. Simkhovitch. He called on her to begin to “develop plans to assure the winning of the peace on the economic and social front,” adding that “it must be a great inspiration to the National Public Housing Conference (as we were known then) to know that it was a pioneer in the whole task of relating housing to the people’s welfare.”

Pioneers, he said, are always needed. Thus began our effort to win the peace, an effort that culminated in the passage of the National Housing Act of 1949, which promised “a decent home and a suitable living environment for every American family.” It is a commitment that remains unfulfilled.

This is not ancient history. It is an abject lesson in the power of audacious goals and relentless advocacy toward a common cause on behalf of concrete solutions. It was undertaken by women and men who were not giants themselves, but did the work of giants because they were willing to work together.

We are their heirs, and like them, we share their sense of duty, their frustration over a job incomplete, and their passion to finish it. There is no good reason why we cannot do what they did. In many ways, we have it easier than they did, not harder. 85 years later, we meet in the same city to learn from some of today’s leading experts on housing and economic development, to discuss how to leverage public and private investments to house millions of families throughout the nation and to solve our nation’s housing crisis.

Our new housing crisis is supply driven. Between 2006 and 2009, we experienced an 80 percent drop in single family housing production. And each year since, we have failed to come close to our housing production needs. More than seven million homes never built in the ten years since 2009. We also have a shortage of millions of units of affordable rental housing. And each year, we get further behind.

The price for inaction is staggering. This morning, from New York to Los Angeles; from San Antonio to Charlotte, thousands of men and women woke up in a tent or car, bathed in a public restroom, and went to work, just like they do every day.

They are not strangers among us. Some of them grew up down the street from us. Some sat next to us in a classroom or worked with us on a jobsite. Some served with us overseas. There but for the grace of God, they could be any of us. They are not strangers, but somewhere along the way, they became invisible. And now, they cannot be ignored any longer.

Today, we will hear from some of the most experienced and thoughtful housing leaders in the country on the most important issues before us. What does administrative reform of Fannie Mae and Freddie Mac mean for the housing finance system and the millions of Americans it serves? In close consultation with an ideologically diverse group of members, we have published a paper that lays out how we can move forward on housing finance reform, leveraging the FHFA and Treasury’s emphasis on administrative reform, while building on the bipartisan foundation established by Congress in the Housing and Economic Recovery Act of 2008. Our panel will explore these issues and what Congress can do ensure that these changes are sustainable and responsible.

What are we going to do to end the scourge of homelessness in our country? It shouldn’t be this hard, and it isn’t that complicated. We have experience developing approaches that work. What we have not had is the political will to pay for and implement them. Our panelists are the leading experts on these issues and will discuss how we develop solutions to this crisis.

As our housing supply crisis worsens, calls for rent controls at the local, state and national level have grown. But if we don’t address the growing shortage of affordable housing, no rent control scheme can address the problem, and some will make it worse. Our panel will explore these issues and discuss solutions that can make a real difference.

We talk a lot about how housing prices are too high for most people to afford, but in many communities, the twisted irony is that they are too low. So low that the cost of construction or rehab is significantly higher than the appraised value of the home when work is completed. Our panel on the Neighborhood Homes Investment Act will explore how this innovative legislation can solve for this problem that plagues both rural and urban communities throughout America.

As many of you know, the black homeownership rate is lower today than it was in 1968, when mortgage discrimination was legal. The homeownership gap for all people of color is unacceptable, but the experience in the black community is unique in many ways, and far worse. Our panel will discuss the important work being done to move the numbers and develop lessons that help all underserved communities increase sustainable homeownership.

Finally, the issue of climate change has received enormous attention, and unfortunately, little action. Our focus is not on how to change climate in the future, but how to address the impact of climate change that we are experiencing right now. Our panel will address how we can do this today.

Tomorrow, we will take these solutions for affordable housing to the Capitol Hill, where we will hear from members of the House Leadership and meet with Members of Congress.

Together, we can make a difference, not just a point. We are the people who are asking the right questions and coming up with informed answers.

If we don’t, who will? If we can’t, what kind of world will we live in five or ten or twenty years from now? Failure is not an option. Neither is disunity. We must work together, or we will fail together.

So, I am here to suggest that it’s time to address this crisis head on, working together on practical, actionable and tangible solutions – refusing to accept no for an answer. Or to put words to the actions of our founders, it’s time for us to Woman Up.