Warm June sunshine streamed through the skylights of the Great Hall at the National Building Museum as guests arrived for NHC’s 44thAnnual Housing Visionary Awards Gala last Thursday evening. Early arrivals were escorted to the museum auditorium for the invitation-only Leadership Circle Reception, where a jazz combo added to the celebratory atmosphere. After a brief welcome from NHC President and CEO Chris Estes, guests heard from Ken Wade of Leadership Reception sponsor Bank of America. Mr. Wade reflected on the role NHC has played in bringing different perspectives of the housing community together to move housing policy forward. 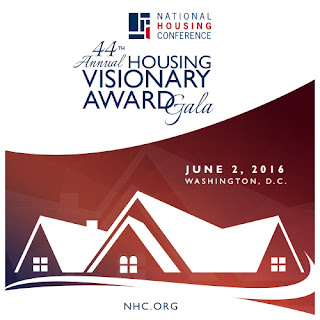 On the main floor, guests connected over passed beverages in the West Hall as “The President’s Own” Marine Corps Orchestra played patriotic favorites. A hush fell over the crowd as the Joint Armed Forces Color Guard entered and performed the presentation of the colors. It was a fitting start to an event that celebrates the core of the American Dream: Home.
After a welcome from National Building Museum Vice President for Development Jennifer Barrett, NHC Chairman Ted S. Chandler of the AFL-CIO Housing Investment Trust kicked off the night’s program with a tribute to NHC’s 85-year history of advocacy for the continuum of affordable housing. Chandler recognized the many people and organizations in the audience whose efforts have contributed to the strength of the National Housing Conference. USDA Sec. Tom Vilsack appeared by video welcoming all in attendance, emphasizing the importance of rural housing and giving all assembled much to contemplate as NHC embarks on its next 85 years of work for the housing needs of all Americans.
Welcomed onstage by Chris Estes of NHC, Gala co-chairs Martin Sundquist of the Wells Fargo Housing Foundation and Michael Horn, Chair of the Council of Federal Home Loan Banks, shared their connection to the event and to NHC. Mr. Sundquist was particularly moved to be part of an event honoring rural housing organizations, having grown up in a farming family. The co-chairs spoke highly of the evening’s honorees, Rural LISC and the Housing Assistance Council. Accepting the award on behalf of Rural LISC was Suzanne Anarde, Program Vice President. Movingly, Anarde recognized departing LISC President and CEO Michael Rubinger for his support for rural housing throughout his tenure at LISC. Moises Loza, Executive Director of the Housing Assistance Council, accepted the award on behalf of his organization and the strong coalition of supporters who have driven the organization forward through its 45-year history.
Gala guests were then excused to the East Hall, where they mingled with the honorees and sponsoring organizations and enjoyed old favorites like corn pudding, and new delights like Korean barbecue beef. Many stayed late into the evening, renewing connections and enjoying the last moments of the housing event of the year.