The potential impact of the small-area fair market rents methodology

HUD recently announced a proposed rule that would use Small-Area Fair Market Rents (SAFMRs) to address high levels of voucher concentration instead of 50th percentile Fair Market Rents (FMRs). This change would also shift the geography from Metropolitan Statistical Areas (MSAs) to ZIP codes. Using a finer scale is meant to give voucher-assisted households the means to move into higher opportunity neighborhoods by providing them with enough subsidy to afford rents in such areas. In the process, HUD believes that SAFMRs will reduce the number of voucher-assisted households that reside in areas of high poverty concentration. A preliminary analysis of this change in methodology suggests that it would produce significant variations in funding availability from year to year.

Since 2006, the subsidy funding for voucher programs has been determined by a budget-based renewal formula which uses Public Housing Authorities’ (PHA) Housing Assistance Payment expenditures from the previous year and an adjustment for inflation. This means that even relatively small annual fluctuations in SAFMR calculations (five or 10 percent), may have implications for how the various stakeholders will be able to achieve the goals of the voucher program.
A substantial number of communities served by PHAs stand to be affected by this rule change: HUD estimates that approximately 300 PHAs serving more than 550,000 voucher-assisted households (28 percent) are likely to be affected by its proposed SAFMR rule. Given the potentially wide impact of this rule change, it is important to analyze the ultimate impact of the SAFMR methodology on the affected jurisdictions.
To do this analysis, Jonathan Zimmerman from the Public Housing Authorities Directors Association (PHADA) collected the hypothetical SAFMRs calculated by HUD from 2011 to 2016. Brian Stromberg of NHC then mapped these by ZIP code across 28 of the MSAs that HUD has proposed (excluding the current SAFMR demonstration cities of Dallas, Chicago and New York). These maps show the hypothetical Small-Area FMRs that had annual changes (either increases or decreases) of between five and 10 percent, or greater than 10 percent. The underlying data are for two-bedroom units within the same ZIP code because two-bedroom units are considered the baseline unit size for HUD’s FMR and SAFMR adjustments and calculations. 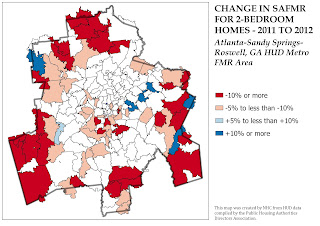 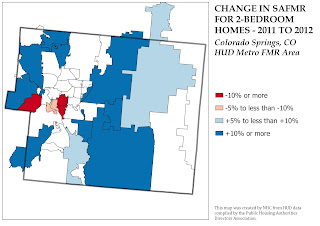 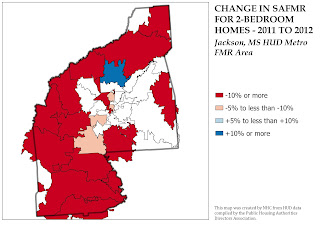 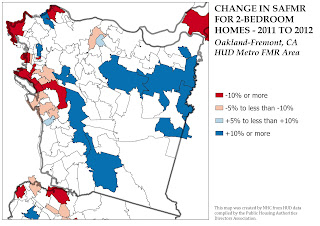 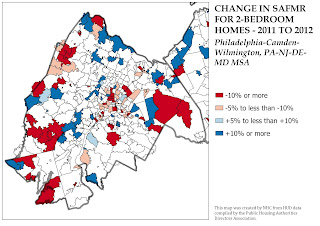 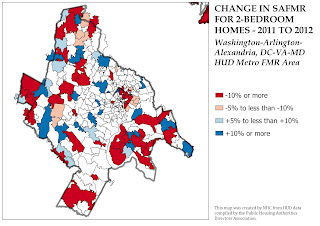 The data used in our analysis reveal that many of the 1,852 ZIP codes affected by the proposed SAFMR rule would have experienced significant changes in FMR for two-bedroom homes from year to year, had the SAFMR methodology being proposed by HUD been in place since 2011 for the proposed areas. Between 2011 and 2012, 665 ZIP codes would have seen SAFMR changes between five and 10 percent, while 968 ZIP codes would have changed by at least 10 percent. From 2012 to 2013, 858 would have changed between five and 10 percent and 709 would have changed more than 10 percent. The table below shows the full analysis.
The analysis presented here is only preliminary and has some limitations to it. A combination of HUD’s SAFMRs along with census tract data would help further identify other possible effects among voucher program constituencies. The purpose of the analysis presented here is to help interested parties get an idea of how annual percentage changes in SAFMR values in the same ZIP code and bedroom size play out over time.
We hope that these data and the maps made from them will inform any comments made on HUD’s proposed rule. While a finer-grain geography would allow for more a targeted implementation of the voucher program, it may also have the unintended consequence of destabilizing the finances of public housing authorities around the country.
HUD’s proposed SAFMR rule is available here. Comments are due Monday, August 15, 2016 and can be submitted on the Federal Register website.
Guest co-author Jonathan Zimmerman joined the Public Housing Authorities Directors Association (PHADA) as a Policy Analyst at the beginning of 2014.  Prior to joining PHADA, Jonathan worked in federally funded rental housing assistance programs for twenty-three years. Jonathan works on legislative, regulatory and administrative matters relating primarily to the Section 8 tenant-based and Section 8 project-based voucher programs.