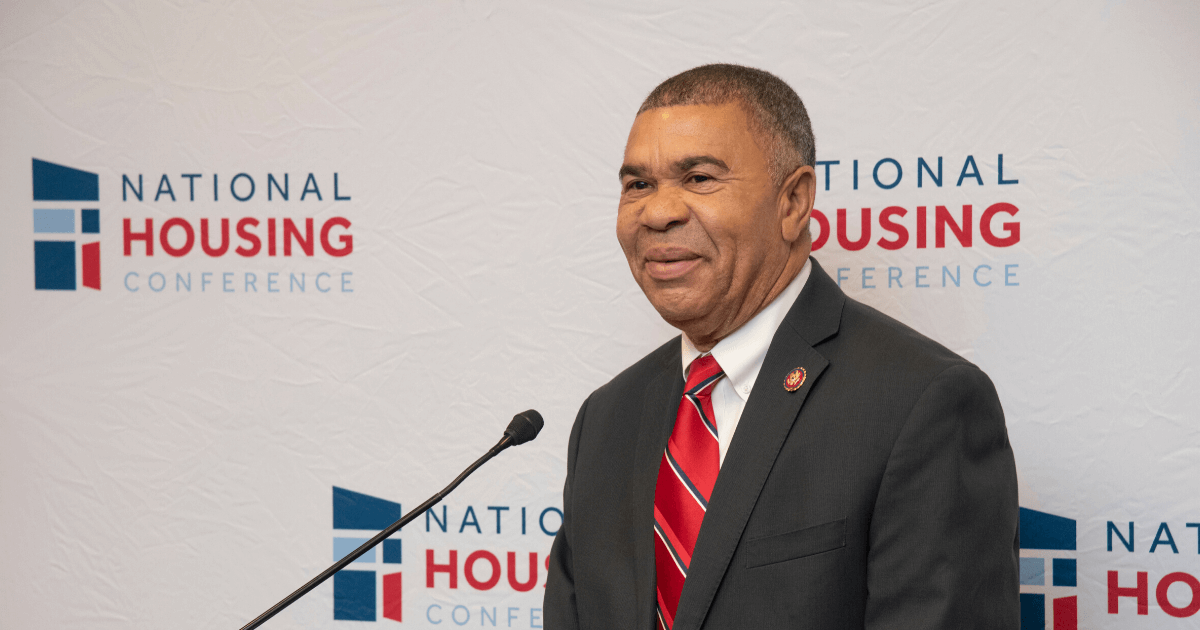 A strong leader and dedicated ally in the fight for fair and affordable housing, the Honorable William “Lacy” Clay has represented the 1st district of Missouri since 2001. Representative Clay serves as the Chairman of the Financial Services Subcommittee on Housing, Community Development and Insurance and is a senior member of the Oversight and Reform Committee. We were proud to have him attend our Solutions for Affordable Housing’s Advocacy Day Breakfast on Capitol Hill and present his remarks. – David

Thank you, Megan, and good morning everyone. Welcome to Washington.

First, I want to give a huge shout-out to your remarkable CEO, David Dworkin. David, thank you for your passionate advocacy for affordable housing and for your dedication to the cause of making fair housing a reality for millions of low-income Americans. I also want to thank your Board of Governors Vice Chair, Anne McCulloch, for all her leadership across the country. Thank you, Anne, for standing up for fair housing. And finally, I’d like to thank my good friends at the National Association of REALTORS for sponsoring today’s event.

As you heard, I’m the Chairman of the House Financial Services Subcommittee on Housing, Community Development and Insurance, and we’re on a mission to restore consumer protection, fair housing and a real chance to achieve the American dream to millions of working families—especially for the millions of qualified prospective minority home buyers who are often locked out of the market, and for the millions of low-income families who need access to quality, safe public housing across this country.

Like you, I’m also fighting to reform the housing finance system to ensure that underserved minority borrowers in our more challenged neighborhoods have access to mortgages, insurance, fair appraisals, and fair inspections to give them a real chance at homeownership. As your CEO David Dworkin stated so well, “The opportunity for Congress to find the bipartisan path forward on housing finance reform is to work with the administration on the parts of their plan they like, while holding a clear line against those that they oppose.”

In my view as Chairman, the Trump administration’s proposal to reform housing finance falls short of many of the important principles that Maxine Waters and I have demanded. We need to start by telling the truth: Fannie Mae and Freddie Mac didn’t cause the financial crisis. The financial crisis was driven by predatory lending, the private market packaging of those toxic, risky loans into securities; and then selling those securities to confused investors.

So regardless of what the administration does, I will continue to advocate for these core principles that absolutely must be part of any effort to address the future of housing finance reform:

As Chairman, I’m also exposing and attacking the insidious and racist practice of redlining in minority neighborhoods. For far too long, lenders, insurance companies and appraisers have been allowed to write off entire sections of American cities and the good people who live there, as disposable. And if we’re going to solve this problem, we need to face the ugly truth that for the better part of 70 years, the United States government did its level best to perpetuate segregated housing, redlining and clear patterns of housing discrimination. That’s racist, that’s wrong, and it needs to end.

We also need to ensure that federally subsidized housing is safe. To advance that goal, I’m proud that the U.S. House has passed a bill that originated in my subcommittee, which I co-sponsored—H.R. 1690, the Safe Housing for Families Act of 2019, which was a reaction to an investigative report by NBC News that exposed the vulnerability of millions of low-income families living in federal subsidized housing to carbon monoxide poisoning. The need for this new legislation is urgent because since 2003, at least 13 public housing residents have died from this hidden killer, including four just this year.

And it turns out that most Americans want us to fight for Fair Housing too. In a recent national poll conducted by Hart Research Associates on behalf of the Opportunity Starts at Home Campaign, the vast majority of Americans (85 percent) believe that ensuring everyone has a safe, decent, affordable place to live should be a “top national priority.” And that view is bipartisan, earning the support of 95 percent of Democrats, 73 percent of Republicans, and 87 percent of independents. Fully 80 percent of all respondents to the poll agreed that both the president and Congress should “take major action” to make housing more affordable for low-income households. And while some think of housing insecurity as just an urban problem, this new poll shows that is just not true. In fact, 70 percent of Americans who live in cities, 53 percent of suburban residents, and 59 percent of Americans who live in small towns and rural areas say that housing affordability is a big problem for them. So, it turns out that ending homelessness and housing insecurity is not only the right thing to do for our country, it’s good politics too.

And the national affordable housing deficit is huge. A recent study by Harvard University’s Joint Center for Housing Studies reports that nationwide, we have lost nearly 4 million low-cost rental units over the last three decades. As a result, three out of four low-income households who would otherwise be eligible for federal housing help, don’t receive it.

So, remember this: a lack of support for affordable housing is not inevitable; it’s a bad policy choice. For too many years, this government has been making the wrong choice for America’s low-income families. But with your help, I’m striving to change that for the better. Thank you for all the great work that you do across this country. I appreciate all your friendship, support and good advice.

Have a great time in Washington, and remember, affordable housing is worth fighting for!