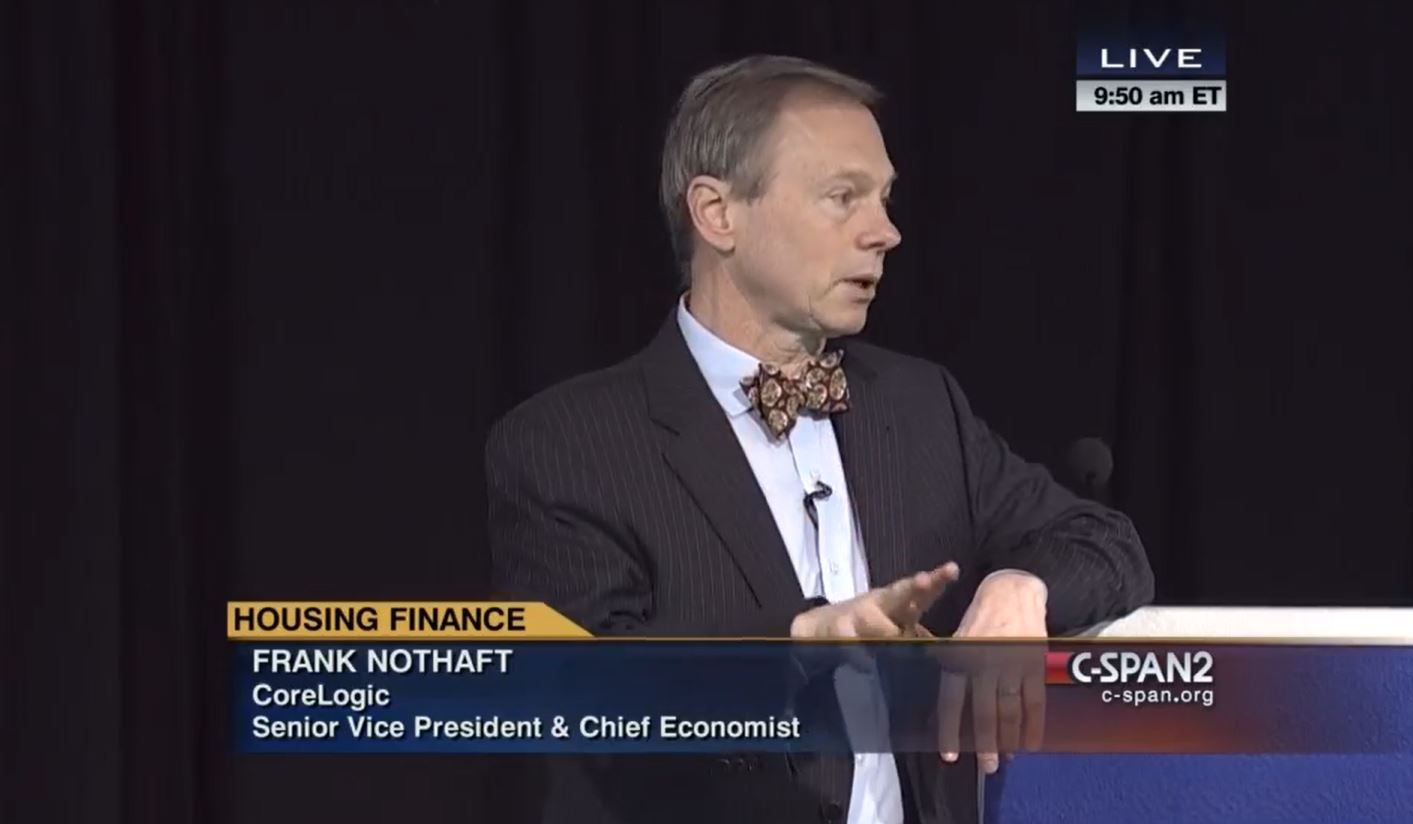 Last weekend the housing industry lost a highly respected and admired colleague, Dr. Frank Nothaft, who served as the Chief Economist for CoreLogic. His passing was sudden and unexpected. It is not surprising that shock and sadness over his unexpected passing quickly rippled through our housing community and resulted in an immediate outpouring of love and admiration.

Dr. Nothaft led the economics team at CoreLogic since 2015, responsible for analysis, commentary and forecasting in global real estate, insurance and mortgage markets. Previously, he was the Chief Economist at Freddie Mac, where he was seen as a top industry expert for over 25 years. He was a prodigious purveyor of data, the go-to expert for trends and forecasting and a trusted colleague and friend to many in the housing industry. A brilliant spokesperson and brand ambassador—he was often seen and quoted on Bloomberg News, CNBC and the Wall Street Journal.

Frank was active in his local community. He served on the Board of Directors of the non-profit Falls Church Housing Corporation, received the Freddie Mac Community Service Award and was the recipient of the 2020 HousingWire Vanguard Award. He also served as an economist on the Board of Governors of the Federal Reserve System.

David Dworkin, President and CEO of the National Housing Council recalled that “Frank was a brilliant economist and eloquent spokesman on the housing economy, but most of all, he was a real mensch. Everyone who has worked with him will remember that first and foremost.”

Pam Patenaude, Board Director of the Bipartisan Policy Center recalled that “Frank was my first call when I arrived at HUD as the Deputy Secretary following the devastating hurricanes of 2017. The most knowledgeable ‘houser’ I have worked with during the past 20 years, Frank always had the answers to my questions. I will miss my dear friend and cherished colleague. May God Bless Frank Nothaft.”

It is rare to have the opportunity to work side-by-side with a colleague who is not only gifted, kind, and collaborative, but also a mentor willing to invest their time to make you better. I will always remember not only Frank’s inherent good nature but also his magnanimous dedication to education, collaboration and friendship. Furthermore, it is plainly evident that I am merely one of many ‘nephews/nieces’ Frank dedicated his time to mentoring. Just one of many marks of the generous, brilliant, and great person that he was.

Molly Boesel, Principal Economist at CoreLogic writes: “I remember his first day at CoreLogic. Frank was my first boss back at Freddie Mac 30 years ago, so when he walked into CoreLogic to take over as Chief Economist it was like a reunion for me. We immediately gave each other a really big hug and then both said at the same time, ‘Are we allowed to hug?’ It was one of my best days at CoreLogic.”

Edward DeMarco, CEO of the Housing Policy Council writes: “The Housing Policy Council team is keeping Frank’s family, friends, loved ones, and colleagues in our thoughts at this difficult time. It was clear to everyone who worked with Frank that he was an outstanding economist but his exceptionally engaging style and plain-English explanations also kept him in high demand as a speaker and public commentator. In the more than two decades that I have known him, however, I have probably most appreciated his genuine warmth and friendliness. Frank was an all-around wonderful human being. He will be missed.”

Robert Dietz, SVP & Chief Economist at the National Association of Home Builders writes: “Frank was an outstanding economist and a true gentleman. He was an enthusiastic and respected speaker at NAHB’s trade show for almost 30 years, spanning the tenure of three chief economists. He influenced every economist in the housing industry, in terms of how to think, how to communicate, and how to improve housing conditions for all Americans. We will miss him as a mentor and expert, but we will also greatly miss his kindness and integrity.”

Mike Fratantoni, SVP and Chief Economist at the Mortgage Bankers Association writes: “For decades, Frank has been a key voice for the mortgage industry – at Freddie Mac and then at CoreLogic. He was the best housing market analyst in the business, able to clearly and concisely convey information that helped our industry understand the current market and make decisions to prepare for the future. Frank had an inimitable style, both in terms of his presentations and his ever-present bow tie. Our thoughts and prayers are with his family.”

Ed Golding, Executive Director of the MIT Golub Center for Finance and Policy writes: “Frank Nothaft was a gentle giant in the housing space. First and foremost, he was a teacher and mentor. Countless members of our community were hired and developed by Frank. He looked for talent everywhere and openness and diversity were just part of his nature. Never an unkind word about anyone although if you forgot to label the axes in a presentation, you would hear about it. One small measure of his breadth and reach, he was quoted in both The New Yorker and The Onion in the same week.”

Selma Hepp, Deputy Chief Economist at CoreLogic writes: “I would say that I learned more from Frank in the two years I worked with him than in my entire career.”

Lisa Rice, CEO of The National Fair Housing Alliance writes: “Our team is saddened by the loss of such a thoroughly nice person who was generous with his time and ideas and skilled at interpreting economic data so it could be easily understood by non-economists—not a skill held by every economist. He contributed much to our field and will be sorely missed.”

Anne Schnare, CEO of Anne Schnare and Associates writes: “The incredible outpouring of grief and remembrances that has accompanied Frank’s untimely passing is a true testament to his unique character and contributions to the industry. As numerous people have acknowledged, he was kind, generous, humble, smart, and incredibly inciteful. As a former colleague at Freddie Mac and friend for 30 years, I shall miss him greatly.”

Robert Van Order, Professor of Finance and Economics and Chair at the Department of Finance at George Washington University writes: “I have known Frank for around 35 years. I first met him in the late 80s when I came to Freddie Mac as chief economist. Frank became deputy chief economist shortly after that, and we worked together closely for a decade and a half.  The first thing I remember was Frank’s bow tie; it seemed unusual at the time but easy to get used to. The second thing I remember was how good an economist he was. No one knew or could use housing data as well as Frank, and he only got better. He was the go-to guy for housing research, including the gory details of what was really in the data. I very much enjoyed working with him and then trying to keep with him after we both were gone from Freddie. He was a gentleman, a scholar and an awfully nice guy. To say he will be missed is inadequate.”

Joe Ventrone, Senior Policy Advisor at the National Association of Realtors writes: “I have been in DC and the housing space for some 50 years, I can honestly say Frank Nothaft wore nice on his sleeve. Frank’s knowledge of the housing ecosystem and his niceness will be sorely missed!”