On Dec. 9, House Appropriations Committee Chairman Hal Rogers (R-Ky.) and his Senate counterpart, Barbara Mikulski (D-Md.) released the FY 2015 omnibus appropriation bill. It follows the $1.014 trillion budget cap set in the Murray-Ryan deal in 2013. The bill will fund 11 agencies through Sept. 30, 2015 and will fund the Department of Homeland Security through Feb. 27, 2015. The House has announced plans to vote on the bill Thursday, Dec. 11, but may need to pass a short-term continuing resolution to avoid a shutdown. The Department of Housing and Urban Development would receive $45.4 billion in gross funding but because of a decline in projected FHA receipts, HUD’s program budget is actually $104 million below the FY 2014 enacted level. Below is a chart showing funding for selected HUD programs. Project based rental assistance, CDBG, HOME, and Choice Neighborhoods would all experience significant funding cuts. However, 10,000 new HUD-VASH vouchers would be funded at $75 million; Jobs Plus and Family Self Sufficiency would hold steady at $15 million and $75 million respectively. Full text of the bill is available here, and the Senate appropriations summary is available here.Positive policy changes in the bill:

Other policy provisions include a prohibition on FHA financing for mortgages seized by eminent domain, no new FHA mortgage fees, and a provision requiring HUD to take enforcement actions if a property owner fails to maintain their HUD-assisted property. Project based rental assistance will also shift to calendar year funding. 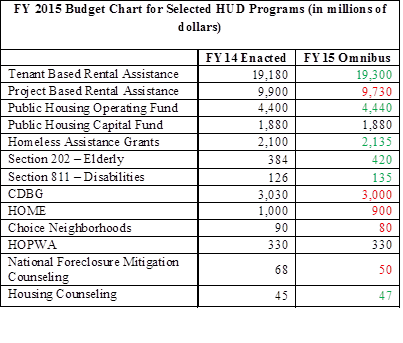