Around the Block: Freeze, Thaw and Melt (down) Edition 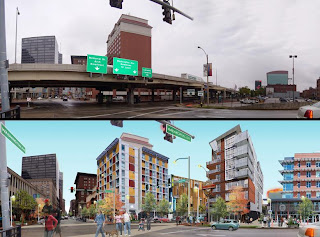 What People Want
According to an article by Patrick C. Doherty in the New America, of the Washington Monthly, the only thing to pull us out of the Great Recession is the same thing that got us into it – housing. But now, there is a new face, and name, to what the people want: homes in central cities and closer-in suburbs where one can walk to stores and mass transit or “walkable urban.” Such “walkable urban” real estate has experienced less than half the average decline in price from the housing peak.

The obvious reasons for the growing demand for walkable neighborhoods are the ever-worsening traffic congestion, fear of the 2008 spike in gasoline prices returning, and the fact that many cities have become more attractive places to live.

But the biggest factor is demographic. The baby boomers and their children, the millennial generation, are looking for places to live and work that reflect their current desires and life needs. Boomers are downsizing while the millennials, or generation Y, are setting out on their careers with far different housing needs and preferences. Both of these huge demographic groups want something that the U.S. housing market is not currently providing: small one- to three-bedroom homes in walkable, transit-oriented, economically dynamic, and job-rich neighborhoods.

Waiting for the freeze to thaw
Housing Predictor recently released a survey reporting that more than two out of three people surveyed believe the housing recovery will be delayed as a result of banks freezing foreclosures. The new Housing Predictor poll found that a huge number of respondents feel negatively about the move by four of the nation’s largest lenders.

Growth Spurt Delayed
The Washington Post reported that home prices in 20 U.S. cities rose at a slower pace than forecasted in August from a year earlier, reflecting slumping sales as the effects of a tax credit waned.

“Prices are declining in line with the widening imbalances between housing demand and supply, and we can expect this trend to continue,” said Michelle Meyer, a senior economist at Bank of America Merrill Lynch Global Research in New York, who correctly forecasted the year-on-year change. “Home prices are likely to decline, probably on a choppy basis, through at least the middle of next year.”