Last Thursday, NHC hosted a webinar on Portland’s restorative justice and preference policy which we learned about through NHC’s Inclusive Communities Working Group. The panelists (Dr. Lisa Bates, Portland State University; Kurt Creager, Portland Housing Bureau; Bishop Steven Holt, Kingdom Nation Church; Victoria James, Portland Housing Bureau; and Matthew Tschabold, Portland Housing Bureau) provided historical context for the City of Portland and the North/Northeast neighborhood and walked through the development, outreach and ongoing implementation of the policy.During the 1950s, ‘60s and ‘70s, the city of Portland used condemnation and eminent domain to acquire land for the construction of Emanuel Hospital and Memorial Coliseum. As a part of the Albina Community Plan of the 1990s, the city marginalized and displaced vulnerable households by not implementing the actions identified to mitigate the negative impacts of the plan.

From the early 2000s to present day, the city has been involved in urban renewal through the development of a light rail line into North/Northeast Portland. While the light rail line brought significant public investment to North/Northeast Portland, it was also a factor in driving gentrification and new private investments in the area, which caused long-time residents to face rising rents and displacement. 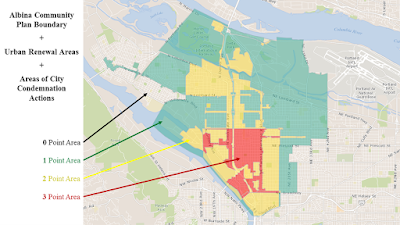 Portland was able to move past the all-too-common argument of whether or not gentrification is good and to acknowledge that most people want revitalization, investment and improvements made, especially in low-income neighborhoods. But gentrification often comes with the negative effects of rising rents and displacement pressures for long-term residents who should also be able to benefit from community improvements. The preference policy is able to address some of these concerns by giving preference to families based on the amount of urban renewal activity that occurred where they lived (as described above), addressing generational displacement of families by urban renewal, giving preference to families regardless of where they currently live and giving top priority to families whose property was taken by the city.

Historically, preference policies have been used as an exclusionary tool to keep people out of places. Portland was able to flip the old model on its head and use a preference policy as a tool for inclusion and bulwark against gentrification. Doing so requires a certain amount of nuance and can be difficult for localities to navigate.  The Portland Housing Bureau worked with local community members, academics, members of the business community and members of the local faith community to form a community oversight committee. The oversight committee is tasked with the “responsibility of reviewing and monitoring the development and implementation of policies and programming associated with the North/Northeast Neighborhoods Housing Strategy and the accompanying $20 million”
In the words of local resident, oversight committee chair and webinar panelist Bishop Steven Holt, “It’s about time that the amount of energy and effort to address those who have been historically wronged be equal to the amount of energy and effort to wrong them. It wasn’t accidental. It was very methodical. It was strategic. It was intentional and throughout the history of our nation, not just in this city but in every major city, all of the people who are… under-served or who are oppressed in one way or another are usually targeted and impacted by most actions. It would be great that the amount of scrutiny and effort that’s used to make sure that we’re not doing things to violate would be equaled by the amount of scrutiny and effort, or I should say the amount of intention, that went into creating the problem.”