Two issues define our new housing crisis. How we address them will determine how our economy bears the next recession, and what kind of a country we will be in the decades ahead. These are the historic and enduring shortages of affordable housing for a growing number of working Americans, which has driven rising housing costs and rates of homelessness across the country; and the catastrophic collapse of homeownership for African Americans. To successfully address these issues, we need to do more than apply policy Band-Aids (although it’s better than doing nothing). We need to conduct major reconstructive surgery by passing a comprehensive National Housing Act for the 21st century.

To be sure, critical policy issues like funding and tax credits for affordable housing construction, responsible modernization of the Community Reinvestment Act, and reform of our housing finance system play a major role in both these problems and potential solutions. NHC and our members are active in each of these important areas. But we need to think about this crisis holistically, and address it comprehensively, if we are going to be successful in achieving our mission of giving everyone in America equal opportunity to live in a quality, affordable home in a thriving community.

The National Housing Conference is playing an essential leadership role, gathering and leveraging the enormous expertise and experience of our members, who represent every facet of the affordable housing community, from the nation’s largest banks to our most prolific and impactful affordable housing developers, to our most passionate advocates. NHC is the place where housing leaders come to get things done. This is why our membership doubled over the past two years, and why now is the best time for you to renew your membership or join for the first time.

The cost of housing, for both homeowners and renters, is less affordable today than at any time in more than one hundred years – and it is on a steady path to get worse unless we act immediately. Affordable rental housing and entry level homeownership is out of reach for millions of working Americans from Portland, Maine to Portland, Oregon; from Nashville, Tennessee to Boise, Idaho. As NHC’s Paycheck to Paycheck database makes clear, this is not just a problem in San Francisco or Los Angeles, California, although these areas show us what is to come if we continue to ignore this growing crisis. In all of these communities, a carpenter cannot afford to live in the home that he or she builds.

Every morning, in cities in every region of the country, men and women wake up in a tent or a car, wash up in a restroom, and go to work. If you haven’t witnessed this yourself yet, you will. Over 4,000 homeless people in Los Angeles do it today, nearly 10 percent of its exploding homeless population.

The data guarantees this crisis will only get worse, as this chart from Freddie Mac makes all too clear. Housing is a continuum. Fewer homeowners mean more renters, more renters mean higher rents, and higher rents mean more economic homelessness, which is driving our national homeless numbers higher every year. It’s the law of supply and demand and that law cannot be repealed. 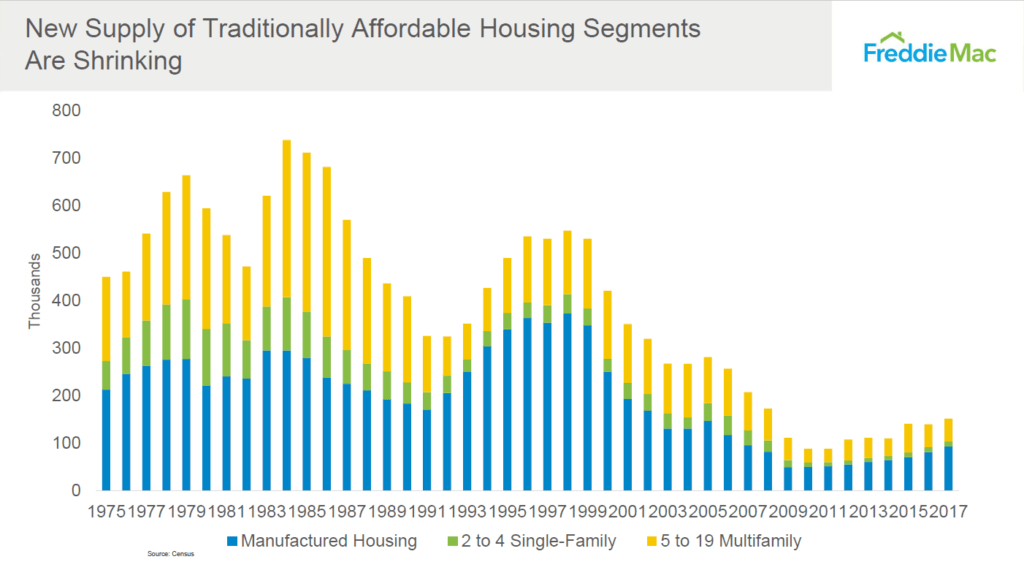 To reverse this trend, we must address local regulations that drive costs of existing housing even higher and increase the cost of building new housing higher than ever. Most of these market failures are self-inflicted. In California, for instance, development fees charged by local governments can reach $100,000 per unit, before a single permit is issued. While NHC members like Eden Housing are building affordable housing despite this locally-imposed disincentive, for-profit development of affordable housing units is strongly discouraged as a result. It’s just one more example of how local policies have a direct impact on driving up homeless rates and drawing out commuting times.

Federal transportation assistance, highly coveted by local governments, should be denied to any state or local government that fails to repeal exclusionary zoning or charges paralyzing fees to build affordable housing. We also need to make it easier to build and finance affordable housing. As long as the cost of originating and servicing a loan exceeds the profitability of mortgages less than $150,000, this crisis will not end. No lasting company will seek out business that loses money.

The crisis in black homeownership

The homeownership rate for African Americans is lower today than it was when segregation was legal. It is a stunning reality that represents hundreds of thousands of American dreams turned into a family nightmare. The long-held false narrative was that too many African Americans bought homes they couldn’t afford with bad mortgages made available by irresponsible housing policies like affordable housing goals for lenders and investors.

In fact, most black homeowners in 2004 were already homeowners and had good mortgages made by Fannie Mae, Freddie Mac and the Federal Housing Administration during the 1990’s, driving their homeownership rate to nearly 48 percent according to the U.S. Census Bureau – before the rapid escalation of predatory lending to first time homebuyers. That growth in homeownership essentially ended as mortgage brokers and subprime lenders targeted them for equity stripping schemes that destroyed their home’s value and left them on the edge of a cliff as the housing bubble burst. As the recession spread, a disproportionate share of them drowned in underwater homes. 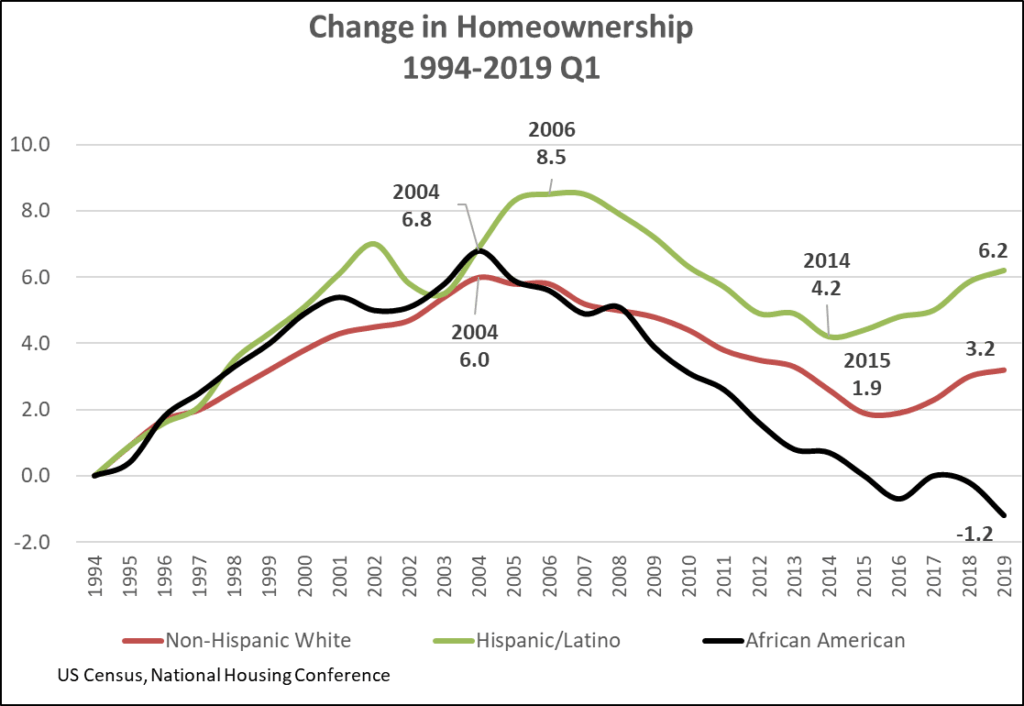 The solution to this crisis begins with 1.7 million black millennials who are mortgage ready and earn more than $100,000 a year. If all of them were homeowners tomorrow, the black homeownership rate would be close to 50 percent. But like most millennials, they are concerned that housing is a bad investment and that down payment requirements are much higher than they are today. They are also burdened by the traumatizing experience of watching their parents and aunts and uncles and grandparents lose their homes during the Great Recession, often due to predatory lenders and toxic mortgages. Convincing them that homeownership is the single most impactful wealth generation tool, and that new laws and regulations have outlawed many of the practices and products that victimized their parents’ generation, will be extraordinarily difficult. Successfully reversing the growing gap in black homeownership will yield essential strategies for closing the broader minority homeownership gap.

Taken together, these issues make up the bulk of NHC’s important policy work. That’s why NHC and our members have begun the hard work of writing a comprehensive National Housing Act for the 21st century. We have gathered experts to develop legislation to build more affordable homes for ownership and rental, end homelessness, enhance community development efforts while ending the displacement of the low and moderate income families that stayed committed to their neighborhoods, and addressing the devastating impact of climate change on our housing stock, which is likely to make all of these issues more difficult to address in the future.

Your input on this historic legislation is critically important to us. If you are a member, please renew today and contact Tristan Breaux to join our policy initiatives and share your intellectual capital and experience. If you are not currently a member, join NHC today! It is a defining moment in the history of housing in America and we want you to be a part of it.