#BlackLivesMatter is a hashtag that has taken on a new life of its own, with increasingly broad acceptance (with some notable exceptions) that has reached into corporate America and hundreds of millions of dollars of advertising (discreet logo placement at end of ad). On reflection, it’s particularly chilling and tragic that it’s a thing at all. We as a nation are quite literally debating the extent to which the lives of millions of our fellow Americans matter.

This week, members of the National Housing Conference’s National Advisory Council met to discuss an issue that is closer to our own work and role in the economy and society generally: the extent to which Black Livelihoods Matter, and what we can do about it.

We were joined by some of the best minds in housing to identify tangible, actionable and sustainable steps that can be taken by the housing industry to close the gap in homeownership among people of color, particularly African Americans whose homeownership rates have fallen the most, and recovered the least, since 2008. 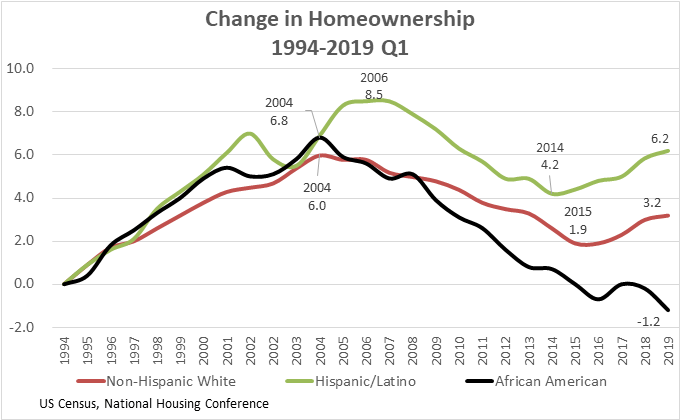 The day began with a discussion led by Congressman David Price (D-N.C.), chairman of the House Appropriations Committee’s Transportation, Housing and Urban Development Appropriations Subcommittee, on what the House of Representatives is doing now to invest in housing production infrastructure and rental assistance. It was followed by a detailed discussion of what the housing community can do to make a difference going forward. This meeting is part of a process that began with the formation of NHC’s Black Homeownership Working Group and will result in an action plan for NHC members on specific recommendations for statutes, regulations and business practices that will lead to finally closing the homeownership gap.

Built on a foundation of extensive research and work in this area, Nikitra Bailey (Center for Responsible Lending), Bill Bynum (Hope Enterprises), Alanna McCargo (Urban Institute) and Antoine Thompson (National Association of Real Estate Brokers) raised a number of ideas to reverse generations of deliberate and highly successful government policy to increase White homeownership while building effective barriers to homeownership by African Americans, Hispanics and other people of color. Developing these ideas will be the work of the NHC’s Black Homeownership Working Group, chaired by Mr. Thompson and the Mortgage Bankers Association’s Steve O’Connor, who is also vice chair of NHC’s Board of Governors.

No one should fool themselves into thinking that ending systemic racism in housing will be easy. Anyone who received advice on buying their first home from experienced parents and grandparents – often including significant help towards making a down payment – has benefited from this system. I am personally a beneficiary of that support. There’s nothing wrong with being born on second base as long as you don’t kid yourself into thinking you hit a double, or believe that the person who hit a single or struck out wasn’t as good as you. In many ways, this represents a part of the foundation on which systemic racism today is built and why ending it is so hard.

The day concluded with remarks by National Urban League President Marc Morial. He made clear that we must “have the will to try something different; to do new things; to think and lean.”

Mayor Morial said that while recent protests were “triggered by police injustice; underlying it is a series of economic stressors and cultural stressors, structural exclusion and discrimination.” He noted that there is an “acute need for a grand strategy with respect to housing that has as its underpinning the principles of justice, the principles of access, the principles of opportunity.” And he called for a “grand strategy that would include everything from how we produce more affordable units, to how we make more people mortgage ready, and how we modify, adjust and update supportive subsidy programs.” He cautioned that current programs, designed during the 20th century, need to be reexamined so they can “confront 21st century problems.” Mayor Morial emphasized the importance of working together to develop solutions and finding agreement around common principles. “What we want to present to the next administration is consensus ideas and consensus principles. We all need to try to get in the same boat.”

NHC is committed to working with the National Urban League and all of our members to address these challenges and contribute to making Black Livelihoods and Black Lives Matter. All Americans will benefit from our collective success. If you would like to participate in this effort as a member of our Black Homeownership Working Group, send an email to membership@nhc.org, and we will include you in the next meeting.